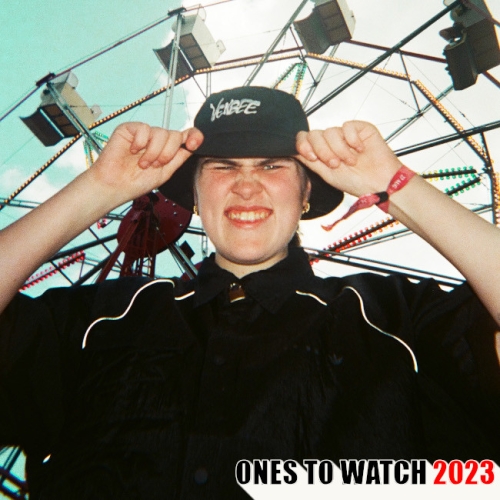 Our final Ones To Watch 2023 is rising artist and songwriter venbee. It’s been something of a breakout year for the Chatham-born 22 year old whose drum & bass tinged songs have quickly found a home on UK charts. Venbee’s fast ascent to viraldom started in late spring last year with her debut track low down (with Dan Fable), a dark pop song tackling the subject of depression. It dominated 21 Spotify Viral charts, including no.1 in the UK and no.11 on Global, whilst Radio 1 made the track its Introducing: Track Of The Week and spent six weeks in the UK chart (peaking at no.59). Following this, she released this infectious and playful track with producer Goddard. Since its release, messy in heaven has topped Spotify viral charts, featured on top level playlists at DSPs (Spotify, Apple Music, Amazon Music), been A list on Radio 1, Kiss, and Capital playlists and peaked at no.3 in the Official Charts. Last month, the track also won the Bass Track of the Year in the BBC Radio 1’s Dance Awards, and venbee was named one of TikTok’s Breakthrough Artists 2022 in the UK and chosen as one of ten artists for MTV Push Artists 2023. She is currently in the studio writing and recording new music for release this year with a host of producers, including Rudimental, Johnny Coffer and Two Inch Punch. Next month, will see venbee heading out on a UK tour, having performed at All Points East Festival, Spotify’s Altar at Printworks and Neighbourhood festival in 2022, and then in May play the Great Escape festival. All in all that is pretty impressive for an artist who has just released two songs, but also easy to see why with her exuberant energy and knack for creating meaningful lyrics with an infectious tone, making her the final selection of our Ones To Watch 2023.