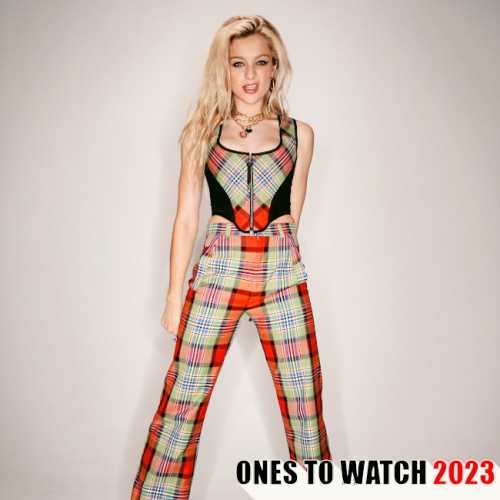 Continuing our Ones To Watch 2023 is the brilliant Suffolk-born artist Natasha Woods, aka Dylan. Raised on a diet of classic rock and big riffs, the 22 year old has had a momentous 2022 since our feature at the start of the year. Now signed to Island Records, the superstar-in-waiting has continued to build her loyal fanbase with the release of The Greatest Thing I’ll Never Learn mixtape, two sold-out UK tours, her first US shows and support slots with Ed Sheeran, Tate McRae and Yungblud. Her mixtape, which contained this anthemic blast of pop goodness, landed at No.19 in the album charts, garnered praise from the NME, The Observer and Rolling Stone to add to her many tastemaker fans and helped her amass over 90m audio streams with DSP support at Spotify, Apple Music, Amazon Music, YouTube and Deezer. We’ve said it before, but we love her blend of big pop overtures and the grungy shade of songwriting to create infectious bangers sprinkled with a liberal dashing of anthemic rock hooks, and it seems we are not the only ones either. Radio 1’s BBC Sound of 2023 has just named her in their longlist to go alongside her MTV Push UK & IRE 2023 feature, and we wouldn’t be surprised if others tip her too. She is set to have a massive 2023, and with a sold-out UK & EU headline tour (including two Shepherd's Bush Empire shows and now over 18.5k tickets sold across her two tours) planned for February and confirmed support for Ed Sheeran’s US tour in the summer, it looks like Dylan is heading for global pop stardom in 2023.