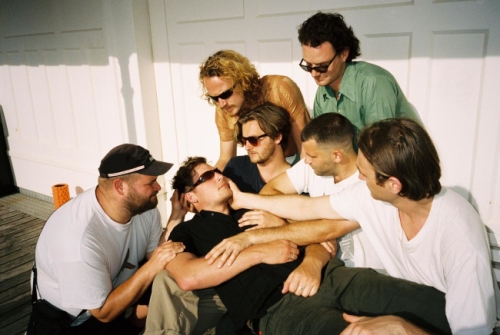 Brighton-based seven-piece Keg have been creating quite a stir in tastemaker circles over the past six months with their brand of angular contemporary post-rock sensibilities. Their previous releases, now included on their debut EP Assembly, have seen widespread acclaim from the likes of BBC 6 Music (Steve Lamacq, Huw Stephens), NME, DIY, Clash, RIOT Mag, the Line of Best Fit, and many more. Streaming support has come from Spotify with numerous inclusions on editorial playlists, including New Punk Tracks, Fresh Finds: Rock, Hot New Bands, Counter. Earlier this week, they dropped this, the latest single to be lifted from the EP, and it’s another addictive and wonky piece of post-rock meets indie. Watch the animated video by Andrew Howarth here. Last night, they played the Great Escape First Fifty, and this Saturday will head out on a UK tour.