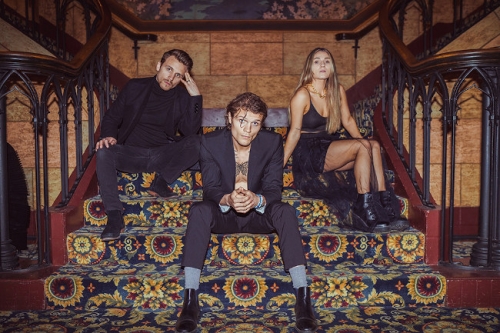 This heart-rending and modernistic pop take on the power ballad is the latest release from Portland’s alt-pop sibling trio We Three. Already a fan-favourite, Half Hearted is taken from their second album Dear PARANOIA, Sincerely Me and has been a prime factor in helping the group amass over 85m streams (going up 1m every 3 days) and 9m likes on TikTok. On Friday, the group will drop their fantastic new music video for the single, featuring Cirque du Soleil trapeze artists Duo Transcend, and has been confirmed to appear on C4’s Sunday Brunch TV show. Further TV support has come from Lorraine (ITV), Sky News @ Breakfast, The Ultimate Playlist (CBBC) and Reuters TV. Tastemaker praise has come from HITS Radio, BBC local stations and commercial/community stations, alongside features from blogs, including The Line Of Best Fit. With the band currently over in the UK on promo, they will play a sold-out show this Thursday (12 August) in London at the 229 and then another show at the Hard Rock Café, Oxford Street, next Tuesday (17 August). If you get a chance to pop down to see them, we highly recommend you do so.