Acredita No Véio (Listen To The Old Man) 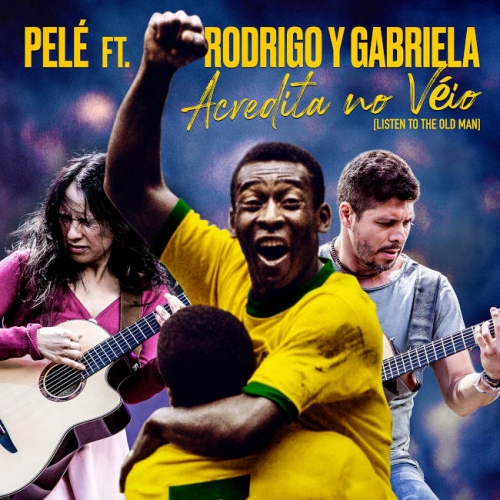 It’s not often that one of the greatest footballers of all time teams up with a Grammy winning duo, but Pelé has done just that to celebrate his 80th birthday this week. An avid music and songwriting fan, Pelé has collaborated with Mexican acoustic duo Rodrigo y Gabriela on a track he originally wrote back in 2005 for his album PeléGinga. It all came about when Rodrigo y Gabriela were invited by fellow Mexican music producer Jorge Berlanga to contribute a song for a tribute to Hispanic composer Armando Manzanero. After finding out they were football mad, Jorge mentioned that he was a good friend of Pelé and asked if they were interested in working on a song together. The duo said yes and quickly found themselves sending music back and forth to Sao Paulo. Fast forward to now, and we have this charming and samba-inspired rework, which sees Rodrigo y Gabriela add their acoustic and dynamic flair to this infectious earworm. Watch the video here. Deserving of spot plays across 6 Music and, of course, features on Talksport, 5Live and SkySports, Acredita No Véio (Listen To The Old Man) also has potential for upbeat alt-mood playlists at streaming, plus those samba-based genre playlists. One for the footie fans and those who like their acoustically flavoured music with a Latin touch.