Artist: Sports Team
Label: Island Records
Impact date: Single: Out now/Album: 3 April 2020
ROTD featured date: Wednesday 26 February 2020
Update Required To play the media you will need to either update your browser to a recent version or update your Flash plugin. 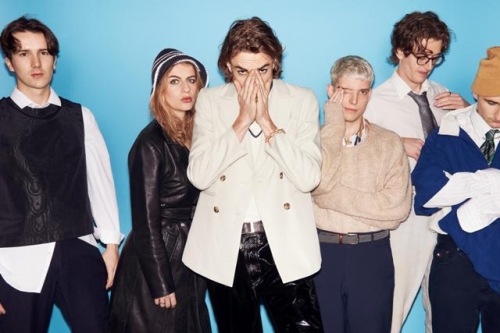 It’s been an extraordinary year for Sports Team, who have built a large, fiercely loyal and fervent fanbase around their electric live shows and a string of infectious blasts of indie rock. They’ve sold out Electric Ballroom and Kentish Town Forum before releasing an album, been named in the Guardian’s G2 2020 artists to watch and their last single The Races achieved A-list at BBC 6 Music and B-list at Radio 1. Dork, DIY, The Line of Best Fit and NME are among their many fans, while frontman Alex Rice featured in British Vogue’s Top Boys, and the band were Elle Magazine’s ‘band to watch’ in the March issue. Last week, they announced the release of their debut album Deep Down Happy and dropped this millennial anthem, with Annie Mac premiering the track as her Hottest Record in the World on Radio 1. It was immediately added to Spotify UK’s New Music Friday playlist, along with additions to their All New All Now and the Indie List. The accompanying video is a quirky blast of fun that sees the Camberwell-based six-piece perform alongside cheerleaders. Watch here. Full of energy, passion and wit, Sports Team are an unforgettable band, and if you get the chance to watch them, do so, you won’t be disappointed. They will be playing the 6 Music Festival on 6 March and Rough Trade East on 3 April before heading on tour of the US supporting Bombay Bicycle Club.