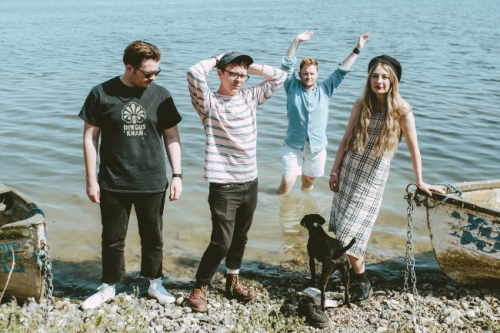 Three years ago we introduced you to the melodic indie rock sounds of Manningtree’s SuperGlu. They are now back with this joyous blast of punk-pop after two years in the making, which has seen lead singer Ben hone his songwriting craft in Nashville, thanks to a UK Dept for Trade & Export songwriter mission. Written by Ben as a love letter from him and his girlfriend (and band’s bassist) Krista to one another and SuperGlu fans, Forever Endeavour is an upbeat and euphoric affair, with glorious punk-pop hooks and an infectious shout-along chorus. Produced by George Perks (You Me At Six, Maximo Park) and funded by a PRS For Music grant, this is the first track to be taken from long-awaited Fig EP, out next year. Previous tastemaker support has come from likes of DIY, Clash Magazine, Spotify (NMF), Huw Stephens (Radio 1), Steve Lamacq (6Music) and Radio X. Next Tuesday (15 October) they play a free entry show at the Victoria in Dalston as part of their UK October tour, so if you're free, we recommend you pop down for an energetic and inimitable live show.