She Don’t Talk About It

Artist: FLOWVERS
Label: self release - Fossil Boy Records
Impact date: Single: Out now/EP: February 2020
ROTD featured date: Tuesday 8 October 2019
Update Required To play the media you will need to either update your browser to a recent version or update your Flash plugin. 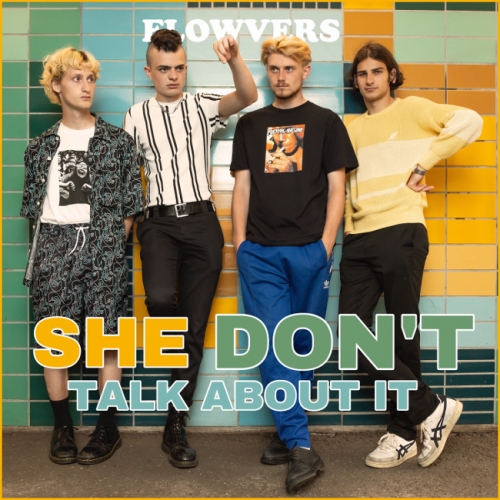 Now here is something to inject a bit of youthful energy into you this morning from teenage indie-pop outfit FLOWVERS. We’ve been big supporters of the Portsmouth band since they dropped Long Way Home back in August 2018. The lads have just released their best single yet with this exuberant dose of big ‘90s indie dance sounds through a prism of early The 1975 and Peace. Produced by Gethin Pearson (Jaws, Crystal Fighters) at the legendary EVE studios, the track has received radio support from BBC Introducing Solent and is set to grace the evening playlist at Radio X this week, having been supported by John Kennedy. Further tastemaker support has come from the Line of Best Fit, Amazing Radio and Spotify. With its funky bass line, infectious guitar riff and massive chorus, She Don’t Talk About is sure to set any indie dancefloor or gig crowd into a frenzy, which is handy as the lads head out on their autumn UK tour today (8 October). It includes a Swim Deep support (9 October), a hometown show this Saturday at the Wedgewood Rooms and This Feeling’s birthday bash at Nambucca (19 October). We have said it before, but we will say it again, this young band has a very bright future ahead of them. One to watch.