Artist: Eyesore & The Jinx
Label: Eggy Records
Impact date: Single: Out now/EP: early 2020
ROTD featured date: Thursday 26 September 2019
Update Required To play the media you will need to either update your browser to a recent version or update your Flash plugin. 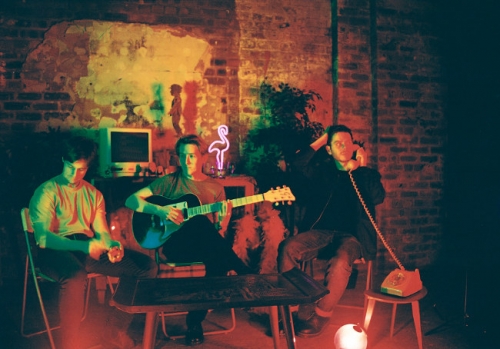 Premiered on Stereogum and receiving its first radio play on Tuesday by Huw Stephens on 6Music is this twitchy and acerbic post-punk number by Liverpool trio Eyesore & The Jinx. Taken from their forthcoming EP produced by Daniel Fox from Girl Band and funded by a PRS Foundation Momentum grant, the track takes aim at the carefree nature of the British expat and their commitment to enjoying themselves at the expense of other cultures. It’s a sneering assault to the senses, full of vigour and passion, from the band (Josh, Liam and Eoghan), and one that has also found favour with Paste and Dork magazines. Expect to see this feature in more blogs over the coming week, as well as rock playlists and new release programming. Previous support has come from Steve Lamacq, Huw Stephens, and John Kennedy with national coverage from Loud & Quiet, Line of Best Fit, and So Young among others. Next Friday (4 October), you can catch them playing a free headline show for Eat Your Own Ears at the Waiting Room. This is poignant, direct and impactful songwriting from a band who have a bright future ahead of them.