The Ballad Of Donald Trump 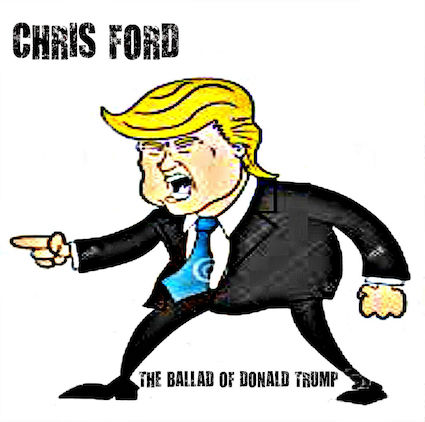 At the end of what’s been a desperately sad week for many people in the forward-thinking creative communities on both sides of the Atlantic, compounded even further with the news of Leonard Cohen’s passing, we felt that this noteworthy song from Chris Ford should get some attention. The London-based singer-songwriter was previously featured by us back in the spring with his track Say Nothing, taken from his album Good Morning America. That, and the rest of the album showcased Chris’s work as an artist who’s not afraid to call out injustice in the world today, corporate corruption, ruthless greed, ecology and other highly-charged issues. The inspiration for this controversial piece was seeing Trump perceived as a comedic character who ultimately charmed a whole swathe of his target audience, enabling him to sweep to power despite many of the very questionable public comments and policies that have made the whole world shudder. Much like Trump himself, this catchy song won’t be to everyone’s taste. But Chris gets our respect for expressing it so eloquently.