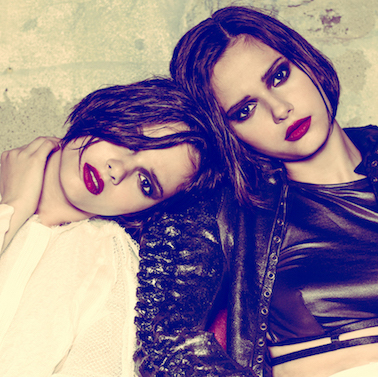 If you saw Duran Duran live at the end of last year on their Paper Gods UK tour, you may well have caught Bloom Twins as one of their support acts. In fact Nick Rhodes from the band was so impressed he’s recorded and produced a big chunk of their forthcoming debut album. As their name suggests, the duo are identical twins sisters Sonia and Anna Kuprienko and the 19-year olds hail from a small town near Kiev in the Ukraine. They came to prominence three years ago soon after uploading their debut Fahrenheit to YouTube. Fashion tastemakers quickly took notice and profile pieces appeared in Wonderland, Vogue, Numero and ID. Now based in London, they play Birthday’s Finding The Female Headliner showcase night on July 28. Their sound has developed over the past three years and this excellent latest track sees them produce a dark, haunting electronic pop sound that reminds us of that great 80’s cult band Propaganda. Icy vocals combine with bold production on a superb song, written by UK musician and producer Anthony Marshall. This is smart, sassy and super cool.