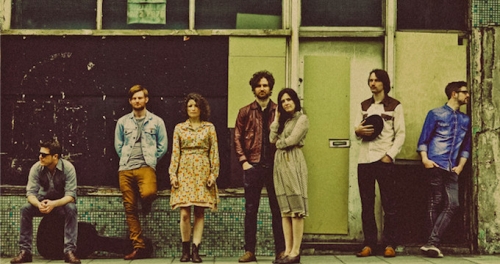 Released as a double A-side along with the song Smoke & Wine, this wonderful track by seven-piece band Flight Brigade starts off deceptively restrained before building into a glorious uplifting folk-tinged stadium anthem, reminding us at times of the mood often created by Arcade Fire in their early days. Lead singer Ollie Baines grew up in Ohio on a farm before eventually ending up back in the UK in Hampshire, where he first met fellow band member (and also now his wife) Miriam when they were both kids. Her sister Dorry is also in the group and their sibling harmonies shine through in their work, having both been steeped in the 70s British folk scene, thanks to their musician parents. BBC 6Music's Steve Lamacq and Tom Robinson plus Radio 2's Bob Harris and Janice Long (who described the band as astonishing, after playing a live session for her) have all supported the band to date and they're now working towards an early 2015 release of their debut LP with acclaimed producer Gavin Monaghan, whose work on the first two Editors albums we particularly loved. After opening up for acts like Dry The River, Seth Lakeman, Stornoway and Grouplove in the past, you'll get a chance to see them live in London this coming Monday night (June 23) at The Lexington. With a beautiful video that took over nine months to create, this track will be swimming round your head endlessly for days on end. Accomplished and assured, this is real music for people who know quality on the very first listen.